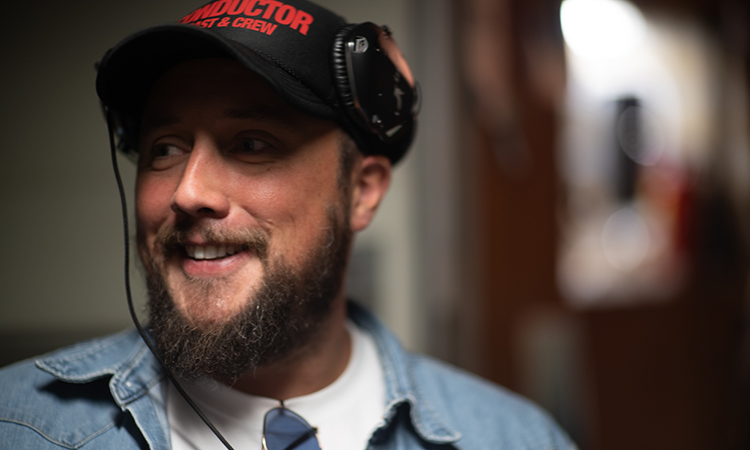 From writer and director Alex Noyer, Sound of Violence follows a young girl who recovers her hearing and gains synthetic abilities during the brutal murder of her family. Finding solace in the sounds of bodily harm, as an adult she pursues a career in music composing her masterpieces through gruesome murders.

Featuring a stunning lead performance from Jasmin Savoy Brown (2022’s Scream, The Leftovers), and support from Lili Simmons (The Purge) and James Jagger (Vinyl), Sound of Violence is one of the most memorable and shocking horrors of the year and proved to be a real audience hit at this year’s Arrow FrightFest.

To celebrate the UK premiere of Sound of Violence at FrightFest, and just released on Blu-ray, DVD and Digital, we caught up with Alex Noyer to uncover the background behind his daring new film…

Before creating the feature, you made a short film called Conductor (available on YouTube), how did the idea come to you?

I had a drum machine obsession! I worked as a producer for many years and made a documentary called 808, telling the story of the Roland TR-808 drum machine, which took five years of my life and was the culmination of my documentary career. It took us all over the world and we interviewed incredible artists like the Beastie Boys and Pharrell Williams. It was an amazing experience and the reason I moved to the US. However, I was so tired afterwards that I needed a new challenge, and my wife encouraged me to switch to horror, since it’s been my lifelong passion. While I was thinking about ideas, I had a lightbulb moment and thought back to the 808 drum machine and realised I needed to kill someone with it [laughs].

Conductor wasn’t intended to be much more than a short film. It was an experimental moment and a kind of closure on my drum machine journey, but it turned out to be a new beginning. I’m not a musician but I’ve always been a big music fan; I was a bad DJ, I couldn’t beat-mix very well, but the only reason they kept booking me in my younger days was for the music I chose. I lived and worked in London for a long time and music always complemented the work we did, the films and documentaries we made and the brands we partnered with. I have a varied taste in music but no matter the genre, it’s the beats that always grab me, and hopefully that shows in my work.

Did you intend to make a feature version of Sound of Violence?

After making the conscious switch to directing, I was developing another feature first but after we took the Conductor short to festivals and won awards, people kept asking me ‘who is this character?’ and ‘what’s her story?’. Then I started developing that idea and realised I needed to take the essence of the character and reimagine it. It was a very rewarding process and that was the decision made, Sound of Violence would be my first feature as a director.

What were some of your biggest influences?

When I was nine years old, I saw Night of the Living Dead and my mind exploded. There’s not much of a TV watershed in France, where I was growing up, and I saw it in the middle of the afternoon, it made such a strong impression. The next summer, when I was around ten, I saw The Evil Dead which was even crazier. It felt like I found my home in horror. My passion for horror also got me kicked out of the boy scouts! I once took a magazine called Mad Movies into the scouts and they called my dad and said ‘your kid brought an inappropriate magazine, come and get him’. He expected Playboy or something, so when he showed up and saw the magazine, he had a look on his face that said to me ‘yeah, you don’t belong here’ [laughs].

How did you approach writing the feature?

The more scripts I’ve written, the more disciplined I’ve become. On the earliest drafts of Sound of Violence, I let it flow. I wrote the character’s backstory first and thought I might have another short film concept for her, but I came up with even more grizzly contraptions she could use and then the short was out of the question. It was more based around gore and horror at first, so when I went to Cannes and tested the water with the current script, we got the feedback that if we could recentre it on this character and make it more of a thriller, we’d have heaps of interest. Then, along with my producing partner, Hannu Aukia, we broke it down, reorganised the structure and worked in stronger character arcs. So, while you still have gory, shocking scenes, the drama supports it.

How did you approach the new role of directing?

I was very involved. I’m not a technical director, so I won’t bother the cinematographer so much. I’ll explain what I want but I won’t touch lenses and things like that, trust me, you don’t want me to! I’m much more performance-focused.

Due to the nature of the story, I worked closely with Jasmin [Savoy Brown] to craft the character and to make sure the authenticity was there. For the story of a serial killer who happens to be a queer black woman, I needed Jasmin to help tell me this story, and I didn’t want to project or assume anything. As a queer black woman herself, I wanted her to take on how scenes should play out and what felt believable to her. I simply couldn’t do it without having an open-minded approach. Jasmin really complimented me by saying the script didn’t have cliches, and after finishing the film, she posted online saying that it was the safest set where she felt seen and heard, which meant a lot to me. To tell this story with authenticity was something I always wanted and, as far as I’m concerned, shouldn’t even be a question mark. Throughout all my productions, I care about diversity and inclusivity. I’m the father of two daughters as well, so if I make a female-led story, I’d better not mess it up!

As a director, one skill I have is that I can help the cast get to a certain place emotionally, talking them into the right mindset, for example during the finale of the film. So, the actors count on me to be there, and I obviously want to support them with what they need in the moment. I hope the actors enjoyed working with me and I really enjoyed our collaborative approach; we had calls in the evening, and were sending lots of emails, because they were so committed. It means so much for a debut director to have actors who are invested. All I can do is match their energy and make sure I’m there for them, too.

The film has earned an amazing response, but also shocked and surprised people. What’s your reaction to this?

It’s a divisive movie and I don’t think it’s a crowd-pleaser, but I’m confident it will find its audience within the genre. We follow a very difficult, conflicted character and I’ve read comments online that say, ‘you’re asking us to sympathise with her’. Actually I’m not, but I’m asking you not to rule it out, because she’s a likeable character who does unspeakable things. The story takes the audience with her, so it’s not a ‘where is the serial killer?’ approach.

I really appreciate the positive reactions and people embracing it, but I also appreciate people being mad at me, because I’m sure they won’t forget the film. The worst thing that can happen to any filmmaker is to be forgettable. It honestly sends shivers down my spine; I’d rather make people angry. Based on the general reaction, I’m extremely grateful that with such an experimental opus, I seem to have hit the right notes, pun intended.

Dazzler Media presents Sound of Violence out now on Blu-ray, DVD & Digital. Find it on Amazon here and on  iTunes here