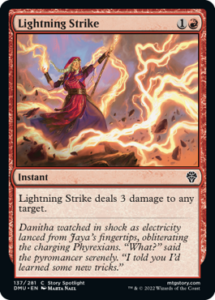 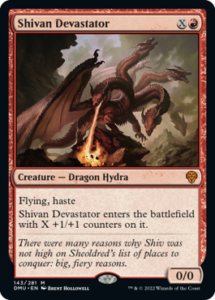 Yes, I’ve said similar before, but Dominaria United brought Lightning Strike back, and that changes everything. We’ve had this shift where most burn spells can’t target players. If they give us a second aggressively costed direct damage spell, things will sing. Mono-Red already got a critical mass of creatures from Dominaria United. Phoenix Chick is a continuous source of damage, very easy to return, and loves +1/+1 counters (from, say, Kumano Faces Kakkazan). Shivan Devastator fulfills the always-needed role of scaling threat for mana floods. Squee’s newest version is nicely costed and works late game. They all help form a backbone of efficient four-of threats. I don’t quite know the perfect list, but I’m sure someone will crack that wide open soon. However, if we’re getting aggro back, it would help if we also had more for its inverse… 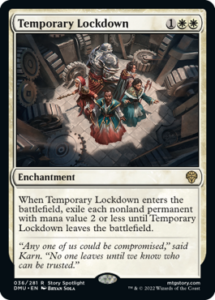 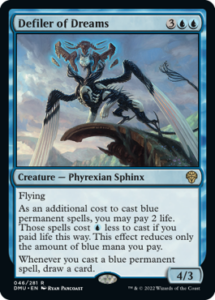 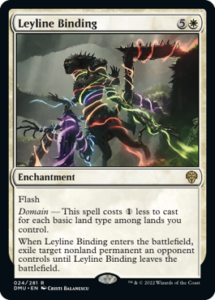 Maybe it’s because midrange strategies are taking all the glory, or every color has such annoying threats, but I’ve seen little control running around. The only one I played against worth its salt used Defiler of Dreams as its win con. And maybe that’s the solution here. We’ve got good removal. Dominaria United didn’t skimp on that. Temporary Lockdown is such a cool card and ruins token strategies. Leyline Binding seemed dull at first but never underestimate an instant-speed Oblivion Ring. But, if I had to guess why it’s not getting more love, I’d say it’s card draw. During my experiments with Izzet, card draw was a consistent problem. There are not a lot of good options in standard. Impulse and Consider fulfill low-level filtering, and you can leverage some of the “draw three, then discard a certain type of card” or other search effects, but it never feels like you can easily refill your hand. I’m not asking for Sphinx’s Revelation, but something similar would make for a more balanced interplay of the core Magic strategies. Things might open for control if they ban Sheoldred. We’ll have to see.

And those are my five major opinions of Dominaria United so far. As I said, I like standard. However, it will need to evolve a little more. Someone needs to make Izzet happen and maybe a Mono-White or Orzhov aggro list to pair alongside Mono-Red. We also need at least two very slow lists to keep balance. If that doesn’t happen, things might grow stale again. But, for now, I believe we’ve only begun a step into a new, exciting, and competitive Magic environment. 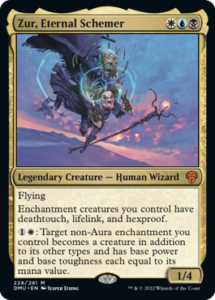 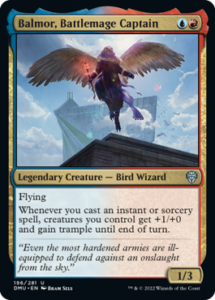 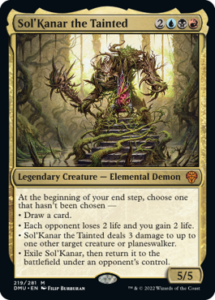 Streaming Sci Fi TV: Farscape Is Available For Free (Including the Peacekeeper Wars) On Shout Factory TV and More

Streaming Sci Fi TV: Farscape Is Available For Free (Including the Peacekeeper Wars) On Shout Factory TV and More

Digital Ratings: House of the Dragon and She-Hulk Enter The Nielsen Top 10

Why Was Almost Human Cancelled and Can It Be Revived?